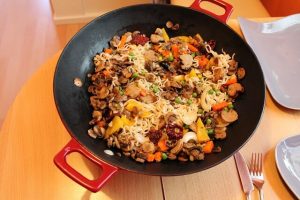 One of the keys to making the perfect Asian dish is how it is cooked. This means to make the best dish, you need the best pan, and for Asian stovetop cooking there is only one pan we need to talk about, and that’s the wok. With the large bowled cooking area and high sides for that simple stirring ability, the wok is where it’s at. But when you’re shopping for a new wok, you see that all the popular ones are either cast iron or high carbon steel.

What does it all mean? What is the difference, the pros and cons, of each type of pan? We’re going to break down all the ups and downs of each style of the pan, what makes them special, and what the benefits and drawbacks to each are going to be. This way, when you go to pick out your new wok, you will be armed with a wealth of knowledge about what it means to cook with each type of wok, and you will be able to make a well-educated decision on which is best for you, your kitchen, and your cooking style.

Cast iron is low in what is referred to as “thermal conductivity”. This means that it takes a lot of heat to make a cast iron wok hot, but it also means that it doesn’t lose that heat very easily either, so it will stay hot for quite some time. This also means that, particularly with older pans and less modern metallurgy, the pan needs to be quite thick to avoid hot spots. The thicker pan helps even out the temperature irregularities that happen while cooking.

A cast iron pan will never be able to provide the even heat distribution of thinner metal pans. This makes them ideal for use in cooking scenarios where there is sufficient time to pre-heat, and then continue to cook at that heat, without the need to readjust cooking temperature. This makes them perfect for cooking things that take a long time and require a relatively even heat the entire time.

One of the drawbacks to cast iron is its relative sensitivity to highly acidic foods or sauces. Since cast iron relies on a build-up of seasoning to take advantage of its excellent non-stick capabilities, highly acidic foods like tomatoes can begin to remove this seasoning layer. This can contribute to “off-flavors” that present during cooking. This can also be mitigated somewhat by having a very solid layer of seasoning on the pan that has been well applied and set for some time. If your cast iron is newer, or fresh, it is not recommended to cook acidic foods or sauces in it until a strong seasoning has been built up.

One final benefit of cast iron is its price point. Often cast iron cookware can be had for very affordable prices, relative to the size of the pan or cookware. Large cast iron woks, skillets, and even dutch ovens can be had for a fraction of what the same pan would cost in another metal or ceramic material. This, in conjunction with their longevity often make them an incredibly attractive option for people looking to expand their cookware without spending thousands on high-end, flashy pans.

Carbon steel is known for heating up even slower than cast iron since it has an even higher specific heat per cubic centimeter and its thermal conductivity is even lower. Because of this, carbon steel cookware is usually no thicker than 2 millimeters thick. This allows it to be incredibly light compared to cast iron since they have very similar metal properties, but carbon steel cookware is manufactured to be much thinner than cast iron.

Even though carbon steel heats with a similar irregularity as cast iron, those irregularities often even out once the pan is preheated well enough. Even still, the pan will never heat up very evenly, and as such, they are useful for quick-cooking tasks where an even cooking temperature is not that critical.

Cast iron is highly reactive to many things, and so it will need to be well-seasoned for best performance. In a difference from cast iron, carbon steel is much softer and much less porous. This means your carbon steel wok might be able to be fully seasoned to a professional kitchen level in only 15 minutes. But this also means that the seasoning layer is delicate, and can be removed much easier. On carbon steel pans, the seasoning can be removed by simply using a scouring pad. While this can be useful for re-seasoning, it can be frustrating if you are used to cast iron pans and having a much more robust seasoning layer.

Since carbon steel cookware is not cast it is rolled out and formed, it can have a much more flexible array of specialty pans that are created for specific cooking tasks. These can include omelet pans, crepe pans, and so on. Carbon steel pans are exceedingly cheap as well, so you can furnish an entire kitchen much cheaper than you could by buying other types of cookware.

The performance of your wok definitely has to do with the quality and type of pan you are using, but if your pan isn’t seasoned properly, it doesn’t matter if it was a garage sale find or you spent hundreds of dollars on it.

One of the features many people desire in a pan, woks included, is that it is non-stick. Seasoning your wok makes all the difference in how well it performs.

Cast iron was the go-to material for years, but its popularity has certainly decreased as lighter options have been introduced. However, many people still prefer the classic feel of cast iron.

Traditionally, Chinese chefs would use pigskin or lard to season their woks, but any high-smoking point oil will work just fine.

While the traditional Chinese woks were made from cast iron, carbon steel has become pretty popular in recent years due to the fact that it is lightweight and retains heat fairly well. Again, you will be using oil that has a high smoking point, such as canola oil.

Which one should you get?

The fancy food flipping of the “Pao Action” looks impressive, but it doesn’t add anything to the food. It is a way to keep the food moving to avoid burning. If consistent cooking results and performance are more important in your kitchen, then cast iron woks like these from Lodge will probably serve you better. They might have a bit more weight, but if taken care of they will last a lifetime.