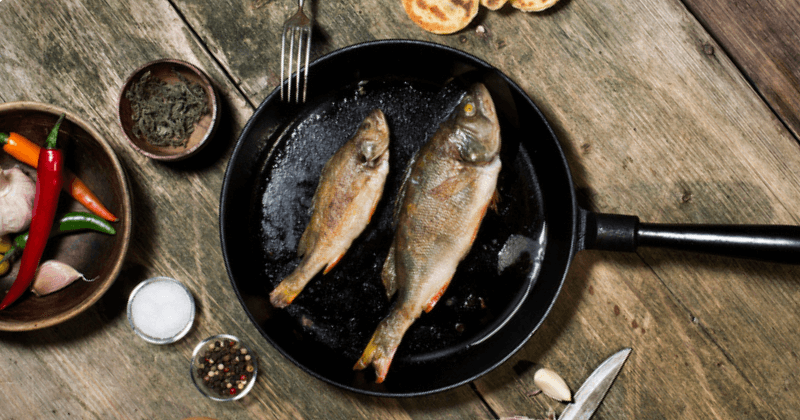 Perhaps no other food brings out the best cooking properties and flavor in cast iron cookware like fried fish. Not only does the deep-frying season the cast iron well, but the cast iron also gives off the most flavor when it is used over a longer period of time at high temperatures. However, a minor downside is that if the cast iron is used for other purposes other than frying fish or the cast iron is used to fry other food, the food can turn out tasting like fish. So, how to solve this problem?

Before we answer that question, let’s start with a relatable question. How can one reuse oil that has been used to fry fish without having off-putting odors in the used oil? Potatoes. Yes, sliced potatoes will absorb any odor from the oil.

After frying a batch of fish, allow it to cool while you enjoy your dinner. Once the oil has cooled, pour the oil into a strainer. Discard the bits that are caught by the strainer. Pour the oil back into the cast iron and reheat the oil and place sliced, raw potatoes into the oil and cook until they turn golden brown. Throw the potatoes away ( or eat them) and then the oil will be reusable without any off-putting taste.

Now, what about cleaning the odor out of the cast iron? Cast iron is porous and absorbs odors and flavors the more it is used. That’s the beauty of cast iron though. The more it is used and seasoned the better the food tastes and the cast iron gets a non-stick surface. But, nobody wants a cast iron that smells like fish, especially when the smell transfers to your other dishes.

There are several ways you can remove the fish smell from your cast iron. The easiest way is to bake it at a high temperature for 20-30 minutes. This method allows the cast iron to expand and “cook away” the odor. This method is only suitable for cast iron that does not have rubber handles.

The trick to baking odors out of a cast iron is to make sure the oven is preheated to 350℉ and bake the cast iron upside down. This allows the smells to come out of the pan and burn off due to the high heat.

2. Boil Water in Your Skillet

The following methods are a little time-consuming but well worth it. It should be noted that whatever method you use, clean the cast iron thoroughly first. This may require some scrubbing but make sure that any loose particles are gone.

3. Use a Vinegar Solution

The first method is to make a white vinegar solution with 1 part vinegar to 1 part water and fill the cast iron about halfway. White vinegar is a great odor absorber, especially when heated. Pour the solution into the cast iron and boil it over an open flame for 20-30 minutes or until most of the solution has dissolved. Then, remove it from the heat and let it stand for 24 hours to thoroughly soak up all the odors. If you choose this method, you may want to turn the oven’s exhaust fan on during the boiling process.

5. Use a Lemon Juice Solution

You can also make a lemon juice solution. Lemon juice is a great odor absorber and will leave the cast iron with a citrusy note. Mix the juice of 3-4 lemons and an equal amount of water and pour the solution into the cast iron and let it sit for an hour. This allows the lemon juice to start absorbing the odors. Next, boil the solution for a few minutes and this will neutralize the odors.

The last method is kind of fun and will give a unique flavor to your cast iron. However, it may not work after frying a big batch of fish because it is not a potent odor neutralizer. After cleaning your cast iron after the fish fry, fry chopped onions and garlic on low heat until slightly charred. Discard the bits, reclean the cast iron, and season. The garlic absorbs the off-putting odors while leaving a good flavor in return for their services.

The bottom line is to use the method that is most effective for you. Use trial and error and have fun with it. Whichever method you use, make sure the pan is cleaned first. Also bear in mind the type of ventilation you have; white vinegar and lemon have strong odors of their own. The onion and garlic trick is most effective on smaller batches of fried fish but is also a great way to add flavor to your skillet at any time. So, after the cast iron is odor-free, feel free to apply this trick to make your next dish really pop.