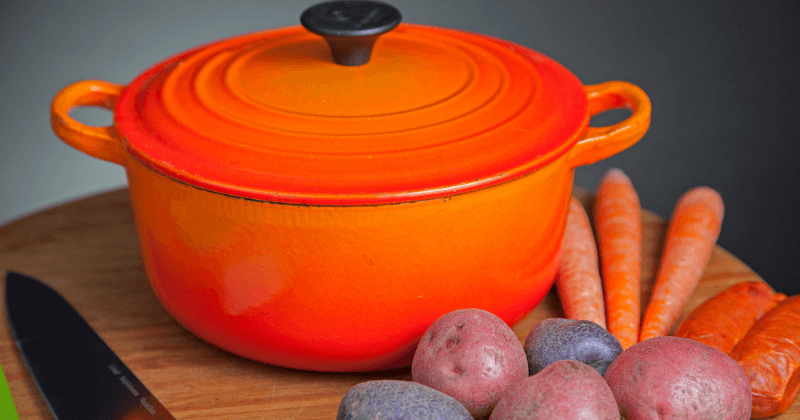 Dutch ovens are a form of kitchen cookware used in preparing different kinds of dishes. They can be used for multiple purposes such as a fast cooker, loaf pan, deep fryer, pasta pot, and stockpot. They are traditionally made of cast iron which gives them heat retention properties and durability.

A traditional Dutch oven has thick sides and a lid to seal in moisture. It produces a multi-directional radiate heat which helps your dishes cook evenly without stirring. In some models, if inverted, the lid can also serve as a skillet as well.

Braising is a popular method of cooking; it is a combination of steaming and covered roasting. Braising allows you to tenderize meat without additives. It involves cooking meat or vegetables in a tightly sealed oven. Cast iron Dutch ovens are perfect for this kind of cooking because of their high heat retention ability. Also, its heavy lid can lock in the moisture and heat, which helps the dish cook faster.

Browning is a cooking method used to remove excess oil from meat and fish. It involves partially cooking proteins surface to produce a brown color. A Dutch oven can perfectly replace a skillet. It can help prevent splattering, which is very common with using a skillet. Lastly, a cast iron dutch will give an evenly caramelized, cooked protein-which is attractive and tasty.

A Simmering technique is used for soups, stew, and sauces. It uses medium-low heat to cook dishes. A cast-iron Dutch oven can be used as a simmer in that it slowly absorbs heat and distribute it over the entire oven without overcooking.

Baking involves using dry heat to harden a dough. Baking is one of the numerous cooking methods a Dutch oven is used for. It avails you of the opportunity of using different heating sources for baking. Cast iron Dutch ovens are very durable and won’t go bad as quickly as baking pans. It is also very economical, non-stick, and healthy for baking.

Boiling involves increasing the temperature of a liquid which in most cases is water. Cast iron Dutch ovens can serve this purpose because they have a lid and sides to prevent the liquids from spilling out. So, if you want to increase water temperature without getting that odd taste from food stain, cast-iron Dutch ovens are the best option because they don’t retain food stain or taste.

Roasting is a meal preparation method enjoyed by many; it reduces the oil and water content of food and gives it a burning flavor. Roasting was primarily carried out in an iron ring before the introduction of other techniques.

In the past, people use open fire charcoal set up to carry out this task. The stress associated with this method and other health-related issues made cooks gradually give up the cooking technique. Roasting can be carried out in a Dutch oven the same way you use a roasting pan.

Frying is a method of cooking that involves the use of preheated oil. Frying can either be shallow or deep, depending on the amount of heat applied and its duration on the heating source. When using a cast-iron Dutch oven for frying, it is essential to preheat the oven for the best result.

Dutch ovens were constructed to allow for slow cooking. It radiates heat in all directions and also has a moisture-retaining feature. Another bonus of using a Dutch oven is to minimize the cost of energy because it requires low heat to get the job done.

Dutch ovens were first known for steaming rice. It is fast and also stays hot for long. Dutch ovens will give the right texture of rice, and the problem of overcooked rice often experienced with pressure pot is avoided.

Cooking experts use a Dutch oven for sauteing foods. Although in other to avoid too much moisture, you have to get your ingredients organized before starting to prevent delays.

As earlier said, cast iron Dutch oven now comes in a variety of colored and beautiful patterns. It’s no longer a utensil meant to be used and kept in the kitchen. Its beautiful presentation has given it an edge, and it is seen chiefly in dining tables serving the function of a serving bowl. Nevertheless, a Dutch oven has more advantages than a serving bowl because it keeps leftover food fresh.

The temperature retention property of a Dutch oven isn’t only limited to heat. An old cast iron Dutch oven can be used as storage for cold wines and drinks.

A cast-iron Dutch oven will do numerous things for your irrespective of your cooking skill. It gives your meal the right flavor and color. All you need do is adhere to the procedures each time you use it for cooking, and you will be amazed at how versatile this utensil can be.